How to Use Indego Bike Share Philadelphia: A First-Timer’s Guide

I’m not qualified to call myself a cyclist. (I’m not even sure what word to use…Biker? Cycler? Cyclist?) I had heard about this bike share thing in Philadelphia, and I wanted to try riding a bike in the city…but, it totally intimidated me. And not just because I was nervous about safety. You know when it seems like everyone else knows what the heck is going on, and you want to try something new…but you aren’t sure where to start?

After my bike path adventures in Burlington this summer, I realized it was crazy that I hadn’t done any biking in Philadelphia, which is practically in my backyard. I had heard a lot about biking in Philly and the new bike sharing program. But because of the aforementioned intimidation factor, it took a little convincing (in the form of talking to myself).

But a 75°F day in mid-October in Pennsylvania? I realized I had no excuse, and it was the perfect time to get all the info and experience it myself so that I could write a guide for any other first-timers out there who want to give it a try.

Apparently, Philly has had a lot of bicyclists for decades, and the city has been making an effort to become more bike-friendly in recent years. From bike lanes to open street days, biking in Philadelphia is becoming safer and more accessible for everyone. And with the Indego Bike Share program launched in 2015, biking around the city is now an option for the millions of people that visit Philadelphia every year. Not only is it a really fun way to see more of Philadelphia in less time, it’s a healthier and more sustainable way to travel.

Make your trip to Philly more sustainable with bike sharing--check out this simple guide!Click To Tweet

The logistics of using Indego are actually pretty simple.

Getting Around Philadelphia on Bike

From shared lanes to bike lanes and buffered bike lanes, as well as trails intended solely for bicycles and pedestrians, there are a lot of ways to ride a bike around Philadelphia. Since I’m such a newbie, I started off with biking the Schuylkill River Trail (past the art museum and Boathouse Row and towards Fairmont Park). This felt much less intimidating than riding on the road. While I got a little confused in spots where the trail intersected with busy roads, it was pretty easy overall. And it was such a fun, different way to see some familiar sights.

I definitely recommend using a bike map–it can be found online here (PDF) with some of the Indego stations marked (though it’s really small when you print it!), and I was able to pick up a paper copy at an information center on the Schuylkill River Trail under the Walnut Street Bridge (though it’s from 2012 so may not be up-to-date).

Philly also has a great public transportation system called SEPTA, and it’s bike friendly! You can take bikes on buses, trackless trolleys, and some subways and regional trains. But depending on timing and location, it might be just as efficient to return your Indego bike to a dock near your current location, ride the bus or train, and then get a bike at another Indego station in that neighborhood. If you are going to take a bike on public transportation, read up on SEPTA’s rules and tips for bicycles here.

Intimidated to try Philly's @RideIndego for the 1st time? Grab this guide from one newbie to another. #visitphillyClick To Tweet

There are basically 3 payment options for using Indego bikes:

Indego passholders also get bonus coupons and perks (like discounts at the Philadelphia Museum of Art or Eastern State Penitentiary), and you can cancel your pass at any time. When you purchase a pass, you’ll get the key in the mail in 5-7 business days. Check out the Indego site to purchase a pass.

A few quick tips for staying safe while riding your bike in Philly:

Bike-Share Comes to Philly With the Launch of Indego from STREETFILMS on Vimeo.

Indego–All the details, FAQ, and up-to-date information about renting bikes from Indego Bike Share can be found here.

Open Streets PHL and Philly Free Streets–Check to see if there’s an open streets event while you’ll be in town! “Philly Free Streets is a new program organized by the City of Philadelphia that was inspired by the excitement over car-free streets during last year’s Pope’s visit, and modeled on the Open Streets programs in effect in over 120 North American cities.”

SEPTA Bike and Ride Policy–Get the details on where and when you can take your bike on public transportation in Philadelphia, and watch quick videos about how to load your bike.

Connect the Circuit–If you want to bike even more around the region, check out one of America’s largest trail networks, the Circuit Trails in Greater Philadelphia. Get the circuit map here for updated information about existing, in progress, and planned trails.

Would you (or have you) tried bike sharing in a big city? Let me know in the comments! 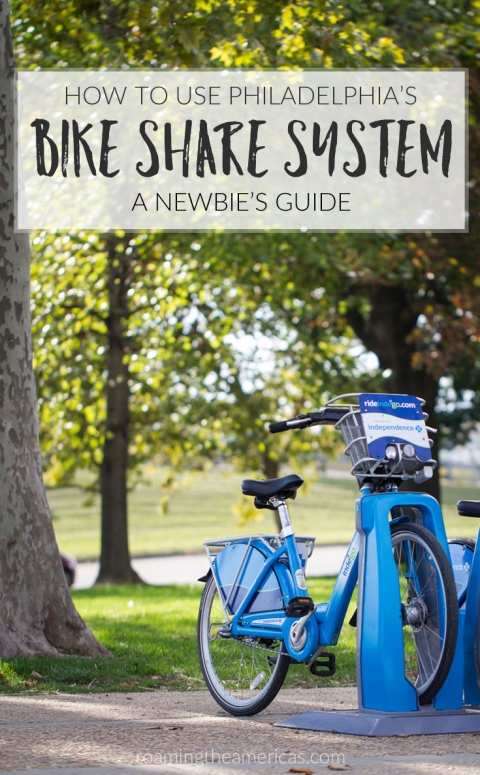