How I Photographed a Stranger for the First Time

This is part one of a 2-part series. Check out part two for practical travel photography tips to help you get started!

As the streets began filling with life, I dodged the motorcycles and tuk-tuk taxis that weaved and bounced their way over Antigua’s jagged roads. I walked slowly and observed in the quiet way that I do. The tourists, the shop owners. Young Mayan girls standing in small groups looking for the next customer to purchase their jewelry, and occasionally practicing the English phrases they had learned. “Something beautiful for your wife!”

I walked along several streets, observing and experiencing the moment. And then I saw a man, crouched on the sidewalk, quietly and patiently painting. Next to him sat dozens of paintings he had created–beautiful scenes from all over Guatemala. I so very much wanted to take his photograph, but I kept walking. I walked a block or two, and then I pretended to stop and look at something in a store window while I argued with myself about whether I would be brave.

I had been to Antigua before. I had taken photos there before. But this was the first time I was intentionally seeking to capture my trip and tell a story through my photographs. I had so much built up in my mind about how I would do this, but when it came to it, I just wanted to retreat into my introverted self, resorting to photographing buildings or street scenes instead of intimate portraits.

I didn’t want to be a drive-by tourist flashing my camera around. Thinking about that reminded me of a past experience that involved a group of Americans, a big school bus, and cameras out the window as we passed the Guatemala City dump. It was an experience that made me incredibly uncomfortable, and I knew I wanted to take a different approach.

Was there a way to capture these places and people authentically, and still respect the dignity of those I photographed?

I finally convinced myself to turn back down that cobblestone street and walk towards this stranger. I stopped and perused his artwork and chatted with him for a minute or two. Miguel Angel, he said his name was. We chatted for a few minutes. He told me he lived nearby and a little about his family, and I told him about the project I was working on. I purchased some note cards, and then I finally worked up the courage to tell him I was a photographer…and…would it be okay if I took his photograph?

He kindly obliged, and I nervously snapped a few frames, rushing myself so as not to take up too much of his time. He smiled shyly, probably wondering why this crazy girl wanted to take his photo, but he was kind enough to say yes.

Throughout my week’s stay in Antigua, I ran into Miguel Angel several other times, and we chatted each time for a few minutes. I asked him how business was going, and he asked me about how my project was going. I looked for him when I returned the following year–I had photographs to give him–but I didn’t find him. But I know I’ll be back, and I’ll walk down the street with the arch and look for my friend once again.

Do you struggle with photographing strangers when you’re traveling? #travelphotographyClick To Tweet

I’ve since photographed other strangers-turned-friends, and it’s still a nervous rush each time. I haven’t always been brave. When I was in Cuba, I desperately wanted to photograph some men playing dominoes. It was on my list because it’s so very Cuban and gives a sense of the laid-back and communal culture.

Finally, I saw a group of young guys playing a game across the street from the center where I was staying. Instead of asking them myself in my intermediate-Spanish-with-a-gringa-accent-on-top, I asked another group member whose first language was Spanish if he would talk to them for me. I chickened out on trying to establish that connection with them. I got some amazing photographs, but it would have been a much richer experience if I had talked with them myself.

In the next post, I’ll be sharing some practical tips on how to get over your fear and get started with street photography and travel portraits.

I’d love to hear your thoughts! Do you struggle with photographing strangers when you’re traveling? Have you ever done anything like this? Let me know in the comments! 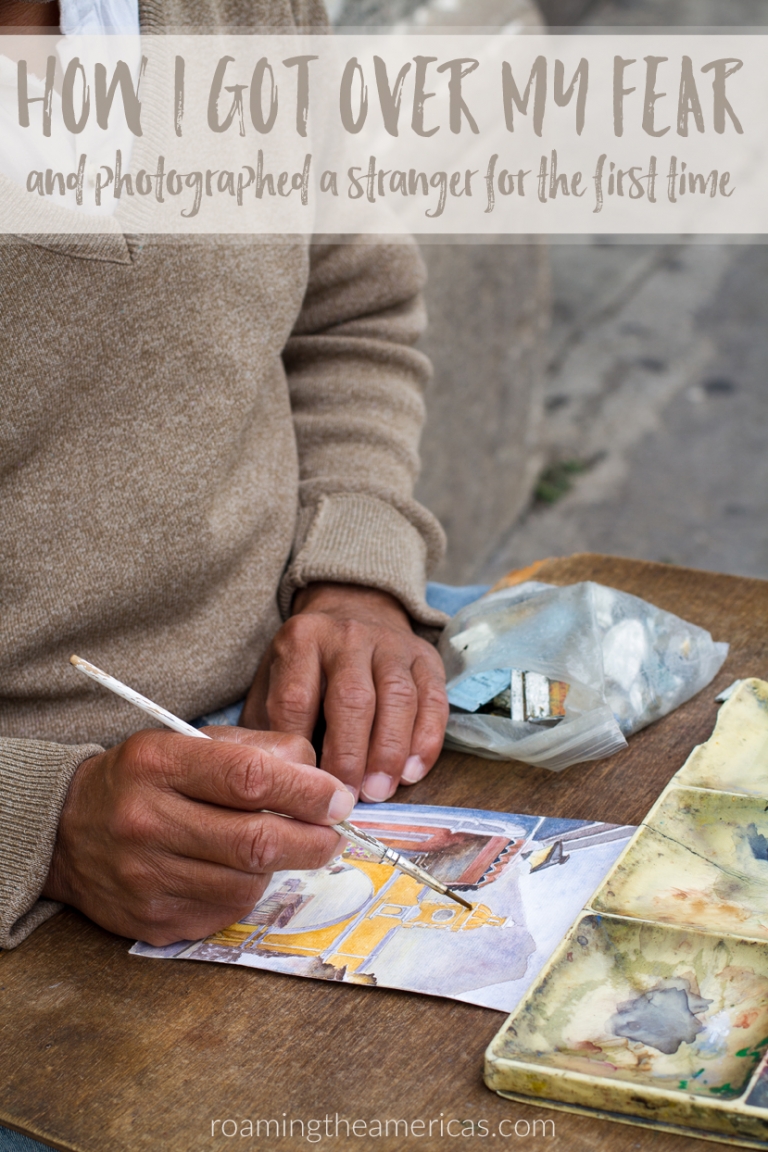 « What Is Responsible Travel?12 Travel Photography Tips: How to Get Over Your Fear »