Wearing a red beanie on this still chilly April day in New York, our Urban Adventures guide kicks off our tour with introductions, doing her best to remember everyone’s names. With a two-name first name, Mary Hannah remarks that she sometimes gets called the wrong thing—so it’s always been important to her to remember (and pronounce) names correctly.

We all proceed to do our best pronouncing the name of a Welsh guest before resorting to his nickname.

As our group starts walking, I take in the sights at City Hall Park, which is currently adorned by flowering trees and the fresh green of spring. It feels bright and alive, even as the skies threaten to pour on us any moment.

This beautiful setting is quite a contrast to what the area once was, as we’ll soon learn.

I was hosted by NYC Urban Adventures on this tour. All opinions expressed are my own.

ⓘ Use the promo code ROAMING for 10% off any New York City Urban Adventures tour!

About the Tenements, Tales, and Tastes Tour

The Tenements, Tales, and Tastes tour with NYC Urban Adventures explores what life was like for those on the outer reaches of society: African slaves, the Irish, Chinese, and Eastern European immigrants.

On this walking food tour, you’ll weave your way through the Lower East Side, Chinatown, and Little Italy, stopping to look at beaver emblems on the sides of buildings, memorials, food carts, and nondescript parks—things that otherwise may not catch your attention unless pointed out to you.

And, of course, you’ll stop for food. There are five tastings throughout the three-hour tour, which I found to be a great pace and balance between eating, walking, and talking.

Keep reading for more details about this food adventure in NYC! 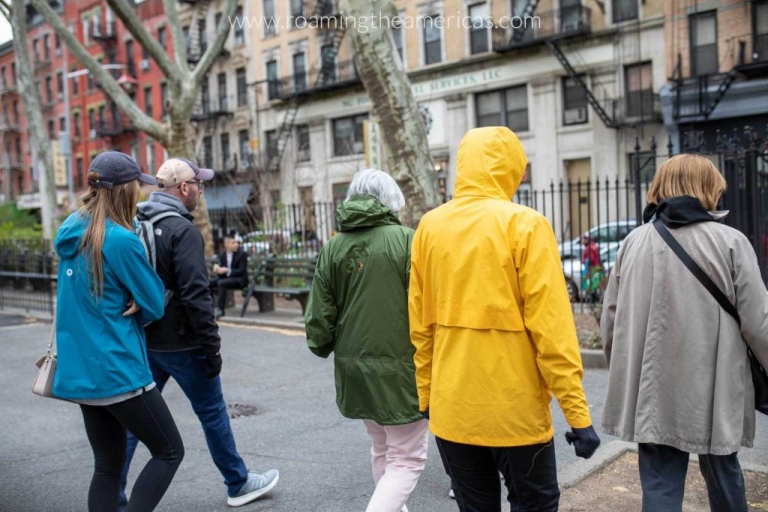 The Tenements, Tales, and Tastes tour starts in City Hall Park with good reason: in the 19th and early 20th centuries it was a commons area for people on the fringes of society—the groups that this tour is all about. “We’re going to talk about those people today, and we’re going to tell their story through food,” Mary Hannah tells us as we kick things off.

It might be hard to picture now, but this area in Lower Manhattan was once the far northern reaches of the Dutch settlement of New Amsterdam. They came to make money off the beaver trade during the early 1600s, which is evidenced by several emblems on the side of the Manhattan Municipal Building.

And of course, Mary Hannah notes that the Dutch weren’t the first people in this area now known as New York City. The Lenape people occupied “Manahatta,” which means the “island of rolling hills,” before settlers arrived and forcibly displaced them over time.

She also tells us about shady characters like Peg Leg Pete who was ousted by the British and went off to live on a farm by himself, which is where a main thoroughfare in this area got its name. And the man who swindled the city for 11 million dollars on a building project. You’ll have to take the tour to find out what these were!

As we walk away from City Hall, we learn about the prominence of New Amsterdam and New York in the African slave trade. During the late 17th and early 18th centuries, both free and enslaved blacks were not allowed to have a proper burial in the church cemetery, and they were buried together in mass graves.

Our group makes its way down a side street, and as we pause in front of a memorial, Mary Hannah tells us about this burial ground that was uncovered in the 1990s as construction was being done here.

While the building project eventually continued, the site outside became a memorial where the remains of several hundred people were given a proper burial, and it was designated a National Monument in 2006. There is also a visitor center incorporated into the first floor of the building at 290 Broadway. 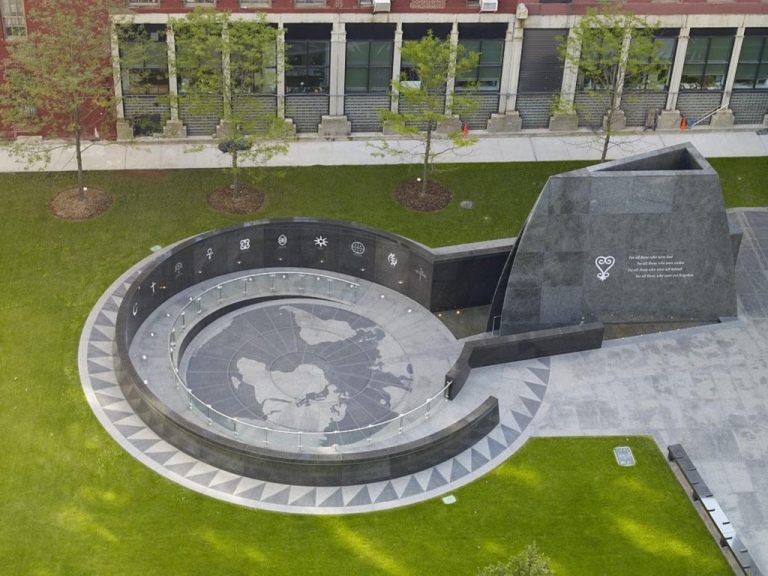 I had vague knowledge that the North wasn’t innocent of this ugly part of our history, but I was admittedly surprised to learn about the prevalence of slavery in New York City. It’s a piece of history that I was totally ignorant of. While we only had a few moments here and viewed the African Burial Ground Memorial from the street, I hope to return to this site in the future in order to learn more.

Irish Outcasts, the Makings of Tenements, Chinatown, and Beyond

The food and history tour is just getting started at this point, and over the next couple of hours we continue making our way through Lower Manhattan neighborhoods, parks, and, of course, small restaurants and stores—all the while discovering new things about those who remained on the outskirts of society here.

We learn about a once-pristine freshwater pond turned cesspool turned landfill, and how the neighborhood built on top of it followed suit.

Do you know what's under your feet as you walk the streets of NYC? It might be a burial ground or sinking landfill. Find out on this history and food tour with @NewYorkUA!Click To Tweet

The area soon became a slum, mostly inhabited by newly-arrived Irish and free blacks in the 1820s. Buildings were continually subdivided, giving way to the first apartment living. And eventually, this area devolved into the home for notorious Five Points Gang in the late 1800s.

Next we explore Chinatown and Little Italy, learning how these (and other) ethnic enclaves have co-existed and their borders evolved over time. Walking down a street with Italian and Chinese businesses side-by-side, it’s not entirely clear to me where one neighborhood ends and another begins.

Despite these fluid geographic boundaries, the racism experienced by Chinese immigrants (which was even enacted into immigration law through the Chinese Exclusion Act) caused the community itself to remain very tight-knit. 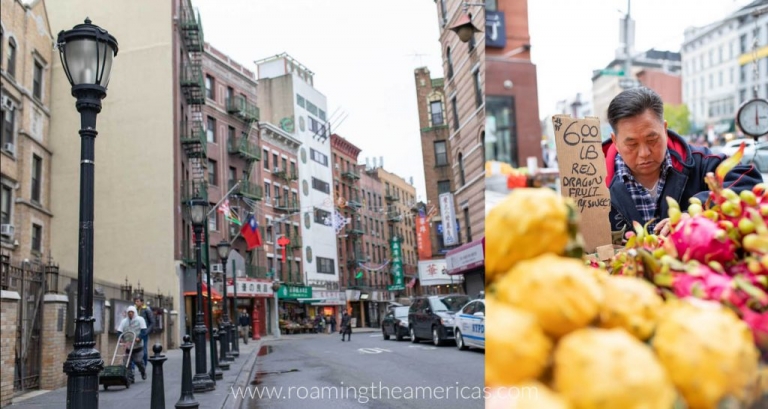 Before heading out of Chinatown, we stop off at a street stall to buy fruit for someone in our group with a gluten allergy. Mary Hannah remarks as we walk away, “If you were a newcomer to this country and you didn’t have enough money for a storefront, a push cart was a great place to start.” The same is true today.

Continuing on through Little Italy, arguably now more a tourist attraction than an ethnic enclave, we stop at a truly authentic 100-year-old cheese shop that still uses their original recipes—plus a bonus visit to a sweet shop across the street (whose chocolate mignon I’m still dreaming about).

To finish off our tour, we head through an area that has been home to everyone from Eastern Europeans to Puerto Ricans before visiting a German pub to relax and enjoy our last treat of the day. 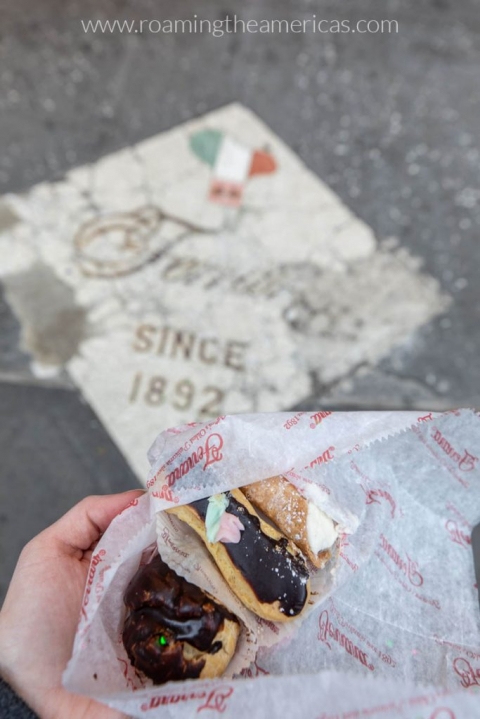 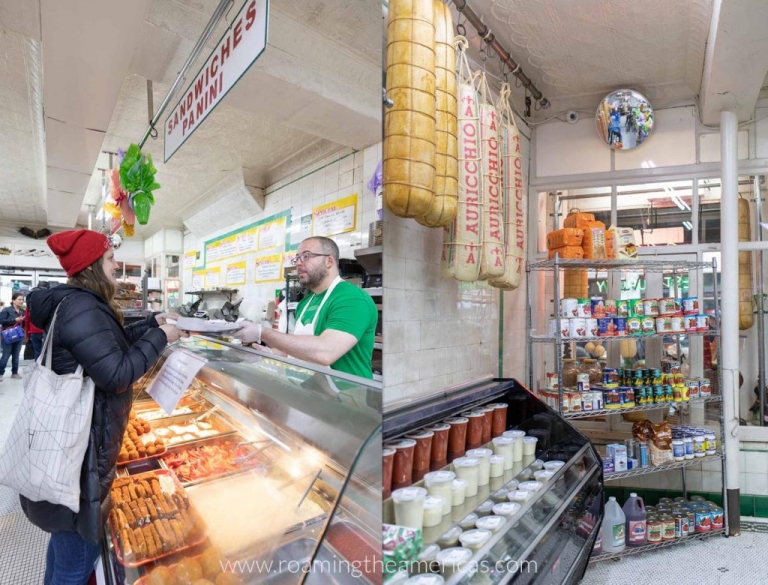 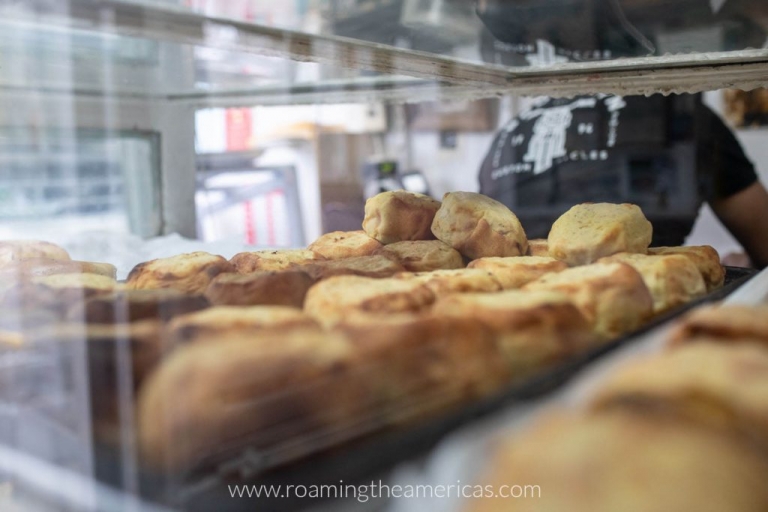 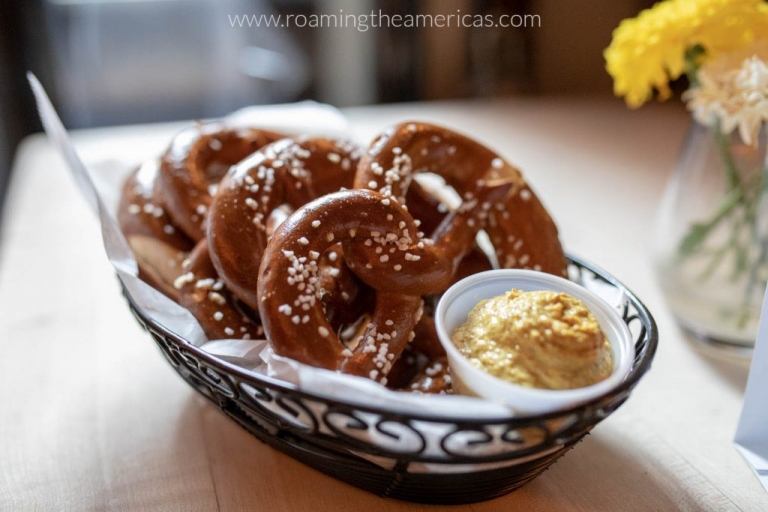 While packed with plenty of information, the Tenements, Tales, and Tastes tour thankfully doesn’t feel like a history lecture. It does an excellent job of weaving together individual stories, overarching historical narrative, and food culture. As you learn about the struggles of various groups and how they’ve shaped the landscape of Lower Manhattan, you’ll walk away with new appreciation for the area’s cultural diversity and a curiosity about the history literally buried under your feet.

This fascinating food and history tour leaves you asking: How did this street get its name? What has that building been? Whose stories lived within these walls? It complicates and personalizes the ideas of assimilation and “the great American melting pot.”

And it shows you how food traditions live on in the midst of this melding of cultures: from German beers to Italian cheeses to Jewish knishes and more.

This fascinating food tour in NYC leaves you curious about whose stories filled the buildings you're passing by, what's buried under your feet, and who has called these neighborhoods home. And it shows you how food traditions live on. Click To Tweet

In addition to being informative, thought-provoking, and fun, NYC Urban Adventures also aims to reduce its impact—both environmentally and on locals’ daily lives:

The tour has a slightly higher price tag than others I’ve been on in smaller destinations, but I think it’s a reasonable mid-range cost for a New York City food tour and is worth the price. At the time of this writing, the tour is $79 per person for an approximately three-hour tour that includes five food tastings. Get the itinerary and read reviews here (save 10% when you use the code ROAMING at checkout).

Tips for Booking the Tenements, Tales, and Tastes Tour

Have you ever done a walking food tour? Which of these foods do you most want to try? Let me know in the comments!